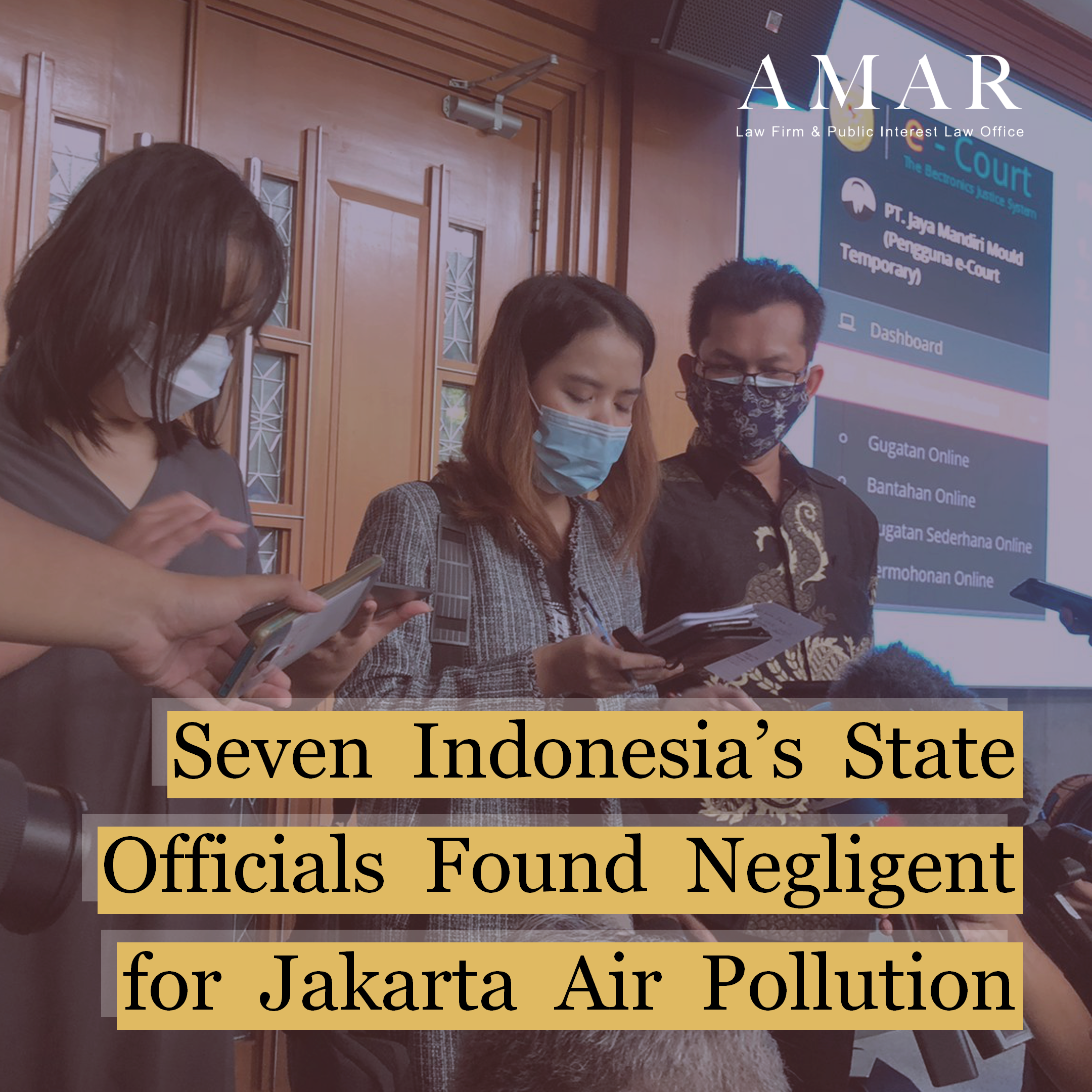 JAKARTA, SEPTEMBER 16, 2021 — The Central Jakarta District Court, where the Citizens’ Lawsuit on Jakarta Air Pollution was filed, has finally decided to rule for the plaintiffs – finding seven state officials negligent of letting air pollution in the capital deteriorate under their watch.

“First, partially granting the defendants’ claim. Second, stating that the President, Minister of the Environment and Forestry (MOEF), Minister of Internal Affairs (MIA), Minister of Health (MoH), and the Governor of Jakarta have committed an unlawful act. Third, punishing Defendant I to set a stricter national ambient air quality standards sufficient to protect human health, the environment, and ecosystems, including the health of sensitive population, according to the scientific and technological development,” said the chairman of the panel of judges, Saifuddin Zuhri, in the courtroom of the Central Jakarta District Court, today.

Fourth, Judge Saifuddin stated, the court punished MOEF to supervise the Governor of DKI, Governor of Banten and Governor of West Java in tightening cross-border emissions from the provinces of DKI, Banten and West Java.

Sixth, Judge Saifuddin continued, punishing MoH to calculate the achievable reduction of air pollution-related health impact in Jakarta, which the Jakarta government should use as the basis of formulation of its strategy and action plan in controlling air pollution.

Seventh, punishing Jakarta Governor to: (a) ensure polluters’ compliance to regulations and permits relevant to air pollution control; (b) enforce sanctions to violators of pollution control laws and regulations; (c) disseminate information on supervision and imposition of sanctions related to air pollution control to the public; (d) set a stricter regional ambient air quality standards for the Jakarta province so that the standard is sufficient to protect human health, the environment, and ecosystems, including the health of sensitive populations according to the developments in science and technology.

Eighth, punishing Jakarta Governor to: (a) conduct an inventory of ambient air quality standards, [projection of] air pollution potentials, [taking into account] meteorological and geographical conditions and land use, considering the emissions dispersion from pollutant sources, [carried out by] ensuring public participation; (b) determining the annual ambient air quality status, announcing it to the public; (c) develop and implement strategies and action plans for controlling the air pollution, taking into account the emission dispersion from pollutant sources in a focused, targeted manner, ensuring public participation.

Ninth, refuse [to grant] the defendants’ claims aside from the above, and punish the defendants for paying court fees in the amount of IDR 4,255,000.00.

Representing the plaintiff’s legal team, Ayu Eza Tiara stated that the plaintiffs and the advocacy team accompanying the trial process appreciated the decision made by the Panel of Judges and sided with the interests of all citizens.

“We see that our demands are partially granted. The judge denied any human rights violations, but our other demands were granted. Banten and West Java governors, despite not being punished, should cooperate to ensure other defendants can perform the tasks the court compels them to do. Even so, we consider that this decision is a right and wise decision, considering that all evidence presented clearly shows that the Government had been negligent in controlling [Jakarta’s] air pollution,” explains Ayu.

She sincerely hopes that the Defendants would accept their defeat wisely and focus on improving air quality rather than making further legal efforts such as appeals and cassation. “The Ibukota Coalition advocacy team is very open to participating in improving air quality in Jakarta, Banten, and West Java. We will keep working to make sure that the government fulfills its obligations,” said Ayu.

The demands of 32 citizens include asking the government to revise the ambient air quality standard in Government Regulation No. 41 of 1999 concerning Air Pollution Control [already revised by GR no. 22 of 2021] to comply with the quality standards set by the World Health Organization (WHO) and guarantee the right to a healthy environment – such as livable air – for all citizens of Indonesia.

Subsequently, the demands also require the government to place an adequate number of air quality monitoring devices, as recommended by experts, providing information on air quality in real-time and its [how citizens can] mitigate pollution impacts, as well as develop strategies and action plans for the air pollution control.

Meanwhile, Khalisah Khalid, as one of the plaintiffs, expressed feelings of relief and pleasure. According to her, the panel of judges proved that the court could still be a viable way for citizens seeking justice.

“We as the plaintiffs as well as citizens will oversee the policy changes mandated by the court against the seven defendants. In addition, we hope that the Defendants will not file an appeal because our lawsuit is not focused on assigning guilt – it is designed to fight for the interests, health, and safety of all citizens – especially our children – so that they can get a good quality of life,” uttered Khalisah.