The Criminalization of Ade Emon and the Failure of Restorative Justice 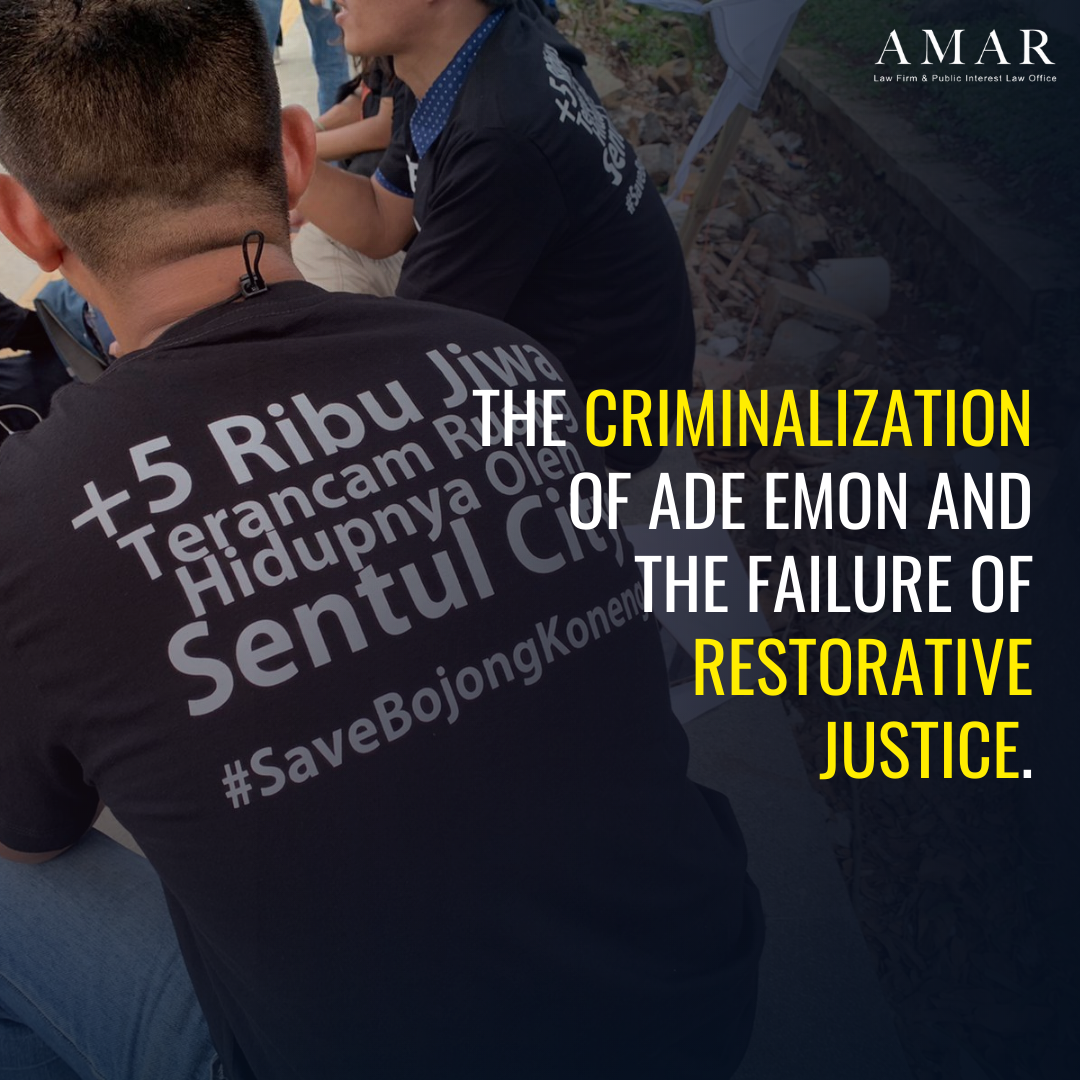 The Criminalization of Ade Emon and the Failure of Restorative Justice

Jakarta (11/02/22) – AMAR as the Advocacy Team of Ade Emon will not appeal the decision of Cibinong District Court (PN Cibinong). On February 11, 2022, Ade Emon was convicted to 4 months and 15 days of imprisonment after he was proven to wreck the Bojong Koneng Village Administration Office. He was charged with Article 170 paragraph (1) of the Civil Code or Article 406 paragraph (1) jo Article 55 paragraph (1) number 1 of the Civil Code because he has caused the village administration office a total loss of 15 million rupiah. Ade Emon’s conviction is considered light, compared to the maximum penalty of 5 years and 6 months on Article 170 of the Civil Code.

The judge declared Ade Emon a perpetrator of vandalism without considering the fact that Ade Emon has made peace by compensating the destruction to the village head. The Advocacy Team has submitted a plea for restorative justice to the Head of Bogor Regional Police Department (Kapolres Bogor) and Bogor State Attorney regarding the case of Ade Emon. By prioritizing the principle of restorative justice, the criminal justice procedure that focuses on punishments shall change to a process of discussion and mediation to create a fair settlement for both perpetrator and victim. Through restoration, the victim and perpetrator can mend their relationship. The victim can state their loss and the perpetrator has a chance to redeem themself through compensation, social work, or other agreements. The restoration that has been reached by Ade Emon and the village head is the agreement that Ade Emon will pay a compensation of Rp1.610.000 to the Bojong Koneng Village Administration Office. The village head has even withdrawn the police report.

Beforehand, the Advocacy Team had submitted an exception, underlining how restorative justice has been fulfilled in the case of Ade Emon based on the conditions mentioned in the Police Chief Circular Letter Number 8/VII/2018 regarding the Implementation of Restorative Justice in Criminal Case Settlement, and Article 6 of the Republic of Indonesia Prosecutor’s Regulation Number 15 Year 2020 regarding the Termination of Prosecution Based on Restorative Justice. One of the provisions of restorative justice for first-time offenders include a requirement for the perpetrator to  compensate the victim for losses under 2,5 million rupiah. The Advocacy Team believes that the indictment made by the public prosecutor contained a skewed narrative since the prosecutor doesn’t attempt to settle the dispute through the restorative justice procedure before issuing a criminal charge.

Due to that, the Advocacy Team strongly suspects that the arrest and procedural missteps by the law enforcement agencies is a form of effort to conduct criminalization by PT Sentul City Tbk to silence the environmental and human rights activists as well as stopping the Bojong Koneng villagers from fighting for their rights over the land and environment. “It needs to be known, the main problem is the eviction and land seizure by Sentul City. This is just an issue that happened as a result of that,” said Alghiffari Aqsa, the Managing Partner of AMAR, as part of the Advocacy Team of Ade Emon.

Moving forward, the Bojong Koneng residents and the Advocacy Team have urged the government to protect the residents’ right to land and environment, and insisted that the law enforcement agents should be neutral in responding to this case. Through the report sent to the National Commission on Human Rights (Komnas HAM) on 25 January 2022, the Advocacy Team and the residents hoped that Komnas HAM would be able to evaluate the human rights violations that happened to Ade Emon in this case.

This case started when Sentul City decided to seize the lands in Gunung Batu Village for construction. The seizure is suspected to be unlawful and violating the rights of the villagers by depriving them of a place to live as well as destroying the local environment. Human rights activists such as Ade Emon and Rocky Gerung naturally objected to the seizure operations. Even though Ade Emon and other Bojong Koneng residents objected to this, the seizure continues to be conducted on the basis that Sentul City has allegedly coordinated the seizure with the approval of the village officials. After learning about that, the residents then flocked to the village office. After an hour of waiting, the village head didn’t address the crowd. The residents recognized that this is a repeating behavior since they have requested the village government to address the seizure of land that has happened since August to October 2021, but the village head has yet to address the situation. After hearing that the village head will not address them this time too, rage took over the residents, which resulted in a riot and vandalism of the office.

After the Bojong Koneng village head caught wind of the riot, he submitted a police report to Bogor Regional Police Department (Polres Bogor) on 2 October 2021. The vandalism was recorded to have caused a total loss of Rp1.610.000. Ade Emon made peace at the village office, witnessed by the residents and village officials on 3 October 2021. Then the police report was withdrawn by the village head. But Polres Bogor proceeded with the report anyway, which resulted in the arrest of Ade Emon after the warrant for his arrest was issued. It’s known that he suffered intimidation and torture during his arrest, such as shots to his leg and arm, eyes taped with duct tape, hit to the chest, hit to the head using a baton and butt of gun, spit to the mouth, and gagged with plastic bag. In addition to that, Ade Emon lost Rp1.550.000 of cash during his arrest.

The Advocacy Team decided to submit a report to the Profession and Security Section (Seksi Propam) of the State Police of the Republic of Indonesia West Java Region, Bogor Resort, regarding the suspicion of a violation of the code of ethics during the arrest of Ade Emon. Throughout the duration of the criminal procedure, the village head and village residents have volunteered to be the bail for suspension of Ade Emon’s detention and pleaded for the implementation of restorative justice. The villagers have reconciled with Bojong Koneng officials.

This case begs the question: Would the pressure from Sentul City give law enforcement agencies the authority to waive the rights of Ade Emon? The act to not implement restorative justice by the police force, state attorney, and judges has strengthened Sentul City’s position to oppress and violate the rights of the victims of land seizure. The criminalization of Ade Emon by PN Cibinong has demonstrated the injustice that stemmed from the ignorance of law enforcement agents of their biases and how it can end in human rights violations.